Nicholas Capriotti has his work cut-out for him! He’s playing “YOU” in the new production – open-ended at the cutting-edge arts space, The Kraine – in A THERAPY SESSION WITH MYSELF, written by rising writer, Anthony J. Piccione. A Therapy Session with Myself tells the story of Alex Grayson, a young college student and aspiring writer suffering from severe social anxiety, depression and Asperger’s syndrome. During the summer before his senior year, he receives a mysterious visit from “himself”, a human incarnation of his inner consciousness (Capriotti). As they interact, Alex is forced to reflect on his own flaws and personality quirks, as well as some of the darkest and most painful memories of his adolescence, while also pondering the question of whether or not he can overcome his many inner demons, and ultimately build a brighter future for himself.

Capriotti started his journey as an actor at 18 years old when he moved to New York City to start his arts education. He studied acting at AMDA on the New York campus before making another big move – to Los Angeles to finish his studies and start his path to his professional career. Upon graduating, Nick worked in a variety of passion projects such as student films, sketch comedy shorts, staged productions, short films, and a pilot for a web series. Even with such successes in LA, Nick knew he wanted to get back to his East Coast roots as a New York based performer, where he could balance Theatre AND Film! Since moving back two months ago, Nick has been taking classes at TAPNYC, booked two short films, a staged reading, and even auditioned for his first feature film.

Let’s get inside the brain of this emerging actor.

What did you tap into in creating your character?

Being that I am fortunate enough to have multiple roles in ATSWM, as well as understudying for the role of “You”, I took it upon myself to make sure my preparation was truthfully telling the circumstances of each event in the scenes I am involved in. For example, I play Alex’s math professor in one scene: the play itself is a construct of memories that negatively affect Alex and his relationships. My creation of the character came from making sure the emotional weight of how certain people (his professor) can take a toll into how Alex perceives himself. For my understudy work, I researched different takes on the idea of consciousness. Alex talks to his consciousness for the majority of the play, so I took theories that matched my understanding of what was going on in each scene between himself and his mind.

How do you gauge your audience?

In my opinion, if audiences are not clear as to what is going on in the story, it’s above my power because it’s a matter of the writing or pacing of the piece. Thankfully, I’m working with a great playwright, so it’s on me to take the words written on the page and have an opinion so strong on what my character is saying that the audience will feel what I feel. When I go to see theatre, there are moments where even a mere sniffle will make me feel like I’m missing out on the story. I want people to feel that way when I’m performing.

Is there something special or different you find you need to do in creating your role as you will be doing it periodically for the next year?

How does this play help you as an actor?

I now get to say that I’m making my Off-Broadway debut to my actor friends that live in Los Angeles. Those movie/TV buffs just don’t get it.

What’s it like having a living author of a play with autobiographical moments right there in the theater?

If there is ever any confusion on my part, not only do I have the opportunity to pull knowledge from Anthony, our amazing playwright, but I get to do his personal journey through life justice. Acting is the creation of a soul- and that soul is sitting there everyday with us. 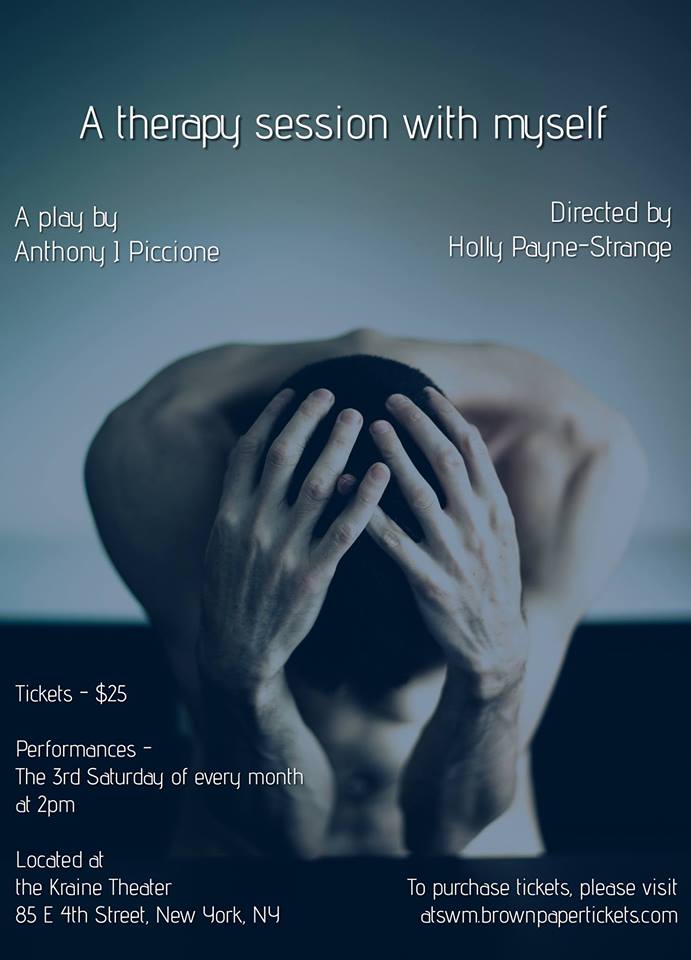