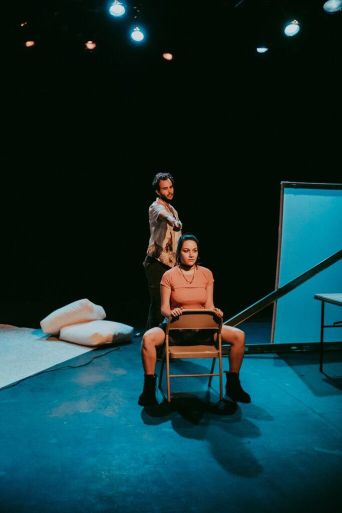 This play, written and directed by Alexandra Siladi, tells the tale of a confusing and intriguing murder involving Mimi, played by Viviana Valeria and Tom, played by Grant Harrison. Mimi occasionally goes missing for weeks at a time and finds herself in strange places and can’t remember how she got there. When asked by detective Jones, Mimi uses her “sleepwalking” as an excuse as to why she was not able to remember killing someone, supposedly. Similarly, Tom is not very mentally stable himself. He likes to play games and not the good kind. We see Tom being interrogated by detective Jones for most of the play. However, at the end we get to see Mimi tell her side of the story which was very puzzling because the audience was under the impression that she was murdered by Tom and had been dead the whole time.

Two Sides is an interesting take on the saying: “there are two sides to every story.” But even when both sides were told the audience still had no idea what really happened. That’s where the question “can two sides ever tell the whole story?” arises, and frankly, no. It’s impossible to know what truly happened because everyone remembers things differently and even if they don’t they are still trying to protect themselves whether they know it or not. There were so many levels to this production. It showed me that just when I think I know something I might not!

Overall, the play had a good story line that was somewhat enjoyable to watch. I’m glad there was a twist at the end. It really left the audience questioning everything. I’m pretty sure I had about 10 more questions after watching that performance. It would have been nice to have a few answers to my questions, but the show was satisfying. The production lacked the comedic element it needed to really make it great. It also lacked a bit from the actors

It’s unfortunate that Mimi and Tom might not work out. They’re both crazy in their own way. They will make the cutest psychotic power couple.